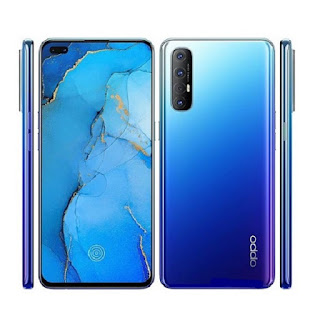 Around December last year(2019), the oppo reno 3 series was launched in China. Since then, the smartphone has trended on Twitter and other social media platforms every now and then with the company posting teasing videos of the phone’s capabilities on Twitter.

Since then there have been different opinions on when the smartphone will be launched in Africa. There have also been multiple suggestions on which properties the smartphone will have as it launches in different countries.
The launch of the smartphone being anxiously waited in Nigeria, South Africa, and Kenya. It is not yet clear when the company will decide to introduce it into the African market.
In Nigeria, the launch of a 4G version of the phone since 5G is not yet available in the country. The hype behind the smartphone is understandable due to the stunning design of the phone and the specifications that it ships with. In Kenya, the phone’s price is expected to be between Ksh 32,000 and Ksh 43,000. The price of the smartphone will also vary depending on the shop and the location.
The Chinese company boasts that the oppo reno 3 pro will be the first to feature a 44 MP dual punch hole camera setup for the selfie camera. For the main camera, the smartphone will have a quad camera setup featuring a 48 MP ultra-clear main camera,13 MP telephoto lens, 8 MP wide-angle lens, and a 2 MP mono lens.
The smartphone will feature a 6.4 inches AMOLED display. It will also run Android 10.0 out of the box. Another feature that the phone is expected to launch within Africa is 128 GB of internal storage. The phone will also have two variants, one featuring 8 GB of RAM and the other featuring 12 GB of RAM. It will also have a 4025 mAh battery.
The specifications and the design of the oppo reno 3 are quite stunning. The phone looks elegant and classy. The 44 MP dual punch-hole selfie camera setup will surely be its main selling point.
According to me the phone is fantastic the hype surrounding the phone is quite understandable. As I always believe that a phone should be judged based on 4 properties; display, camera, memory, battery, it seems the phone will pass all the 4 tests. As everyone is waiting for the phone to launch in their individual countries, it is clear the phone will come along with a hefty price tag.