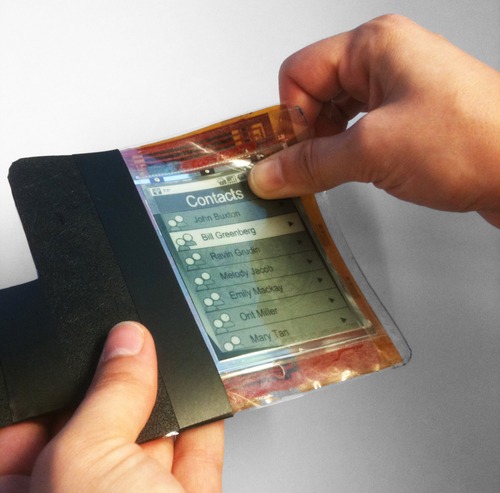 In 2011, the ‘paper phone’ was invented but it was only a prototype, meaning it was just for testing and not mass production.The inventor of the paper phone is Roel Vertgaal, the director of Queen’s University Human Media Lab.The phone was allegedly said to revolutionize the world of interactive computing.
The phone was actually running on Android.The computer feels and works like a small sheet of paper.It is described as a flexible phone.It has the normal smartphone functions.It can call, message,store documents and even play music.All this s displayed on it’s E-ink display.
The phone sensors are programmed to respond to gestures like bending the corner of the display which the turn the pages if you’re reading a book.You can write on the display with a pen and actually draw on it.The phone also doesn’t use any battery on standby.This is a feature we would all want in our modern smartphones.
Impact of The Paper Phone
The paper phone was set to revolutionize the office.The paper phone would replace the heavy sheets of metal and glass that we use today.You can even pile up the paper phones like files in an office without them breaking.Who wouldn’t love an unbreakable phone?
However , the smartphone never made it for mass production and i would guess it is because of lack of financing.The phone’s display is only 9.5 cm diagonally which is a factor which also discouraged any investors.
Just imagine if a company decided to acquire the ‘paper phone’ prototype back in 2011?Life today would be very different.We would walking around with a paper thin smartphone in our pockets or purse.Considering the phone is also very flexible, it means you could bend it to fit in the tightest of spaces.