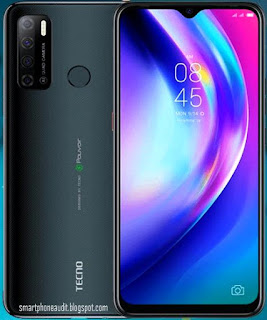 The Tecno Pouvoir 4 is the 4th generation of the Tecno pouvoir series which was launched back in April 2018. The pouvoir series smartphones are widely known for their huge batteries. The smartphones also offer very good features at a very low price.
In this review, I’m going to grow through the device in 5 categories; Display, Hardware, Memory, Camera, and Battery.

The Tecno Pouvoir 4 sports a 7.0 inches IPS LCD display with a screen resolution of 720 x 1640. This leaves the display with a pixel density of 256 PPI. The huge display is perfect for smartphone gamers and also those who like to spend their time on YouTube or watching movies on their phones.

The phone runs on Android Q out of the box. It utilizes a Mediatek Chipset and a 2GHz Quad-core processor. I couldn’t really find the specific type of chipset that the phone uses, but I will update you as soon as I get the information. However a 2.0GHz CPU is a really decent CPU. However, the chipset and the android version may determine how well the CPU performs.

The Pouvoir 4 ships with 32 GB of internal storage and 3 GB of RAM. It also has a dedicated microSDXC slot which supports a memory card of up to 128 GB. The amount of storage on the device will be enough for light smartphone users so you might need to purchase a memory card after all. As for RAM, it is enough for the smooth operation of the phone, but when it;s comes to gaming, it might be a bottleneck.

The phone ships with a quad-camera setup at the rear. The setup houses a 13 MP main camera, 2 MP depth sensor, 2 MP macro shooter, and a low light sensor. A quad-LED flash is also included at the back.
At the front, the phone utilizes a single 8 MP camera that can shoot 1080p videos at 30 fps.

The phone is powered by a huge 6000 mAh battery. Tecno boasts that the phone features speed charging but it’s nothing compared to a fast charging. It also uses the MicroUSB 2.0 so don’t expect the fancy USB-Type C.

The fact that the phone ships with Android Q is exciting. This means you may have features like the system-wide dark mode which we all love. The huge battery is also an advantage since you won’t need to carry a heavy power bank around. The 6000mAh will provide enough juice to last you at least 32 hours of heavy usage.
On the other hand, the front camera doesn’t include an LED flash so night selfies might be poorly lit. If you’re shifting from a high-end smartphone, the Tecno Pouvoir 4 rear camera might also seem a bit poor.
Let me know what you think about the Tecno Pouvoir 4 and the Pouvoir 4 series, and also subscribe for more reviews.