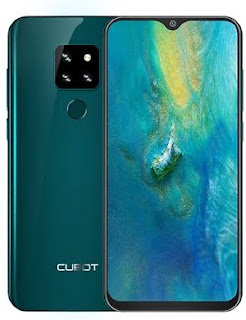 Cubot is not a very phone among smartphone lovers.The phone is always bashed by it’s poor battery but on the other hand it’s appreciated as it comes with cool features like NFC.The truth is not all Cubot smartphones are that bad.

Cubot smartphones are good budget smartphones that come at a very low price and with some features that even some devices the tecno camon don’t have.The Cubot P30 is one of those devices.I’m not saying that it is better that the Tecno Camon as to be honest, it is isn’t, but it offers good specs for a lower price.

However, i always say that you should expect high end end performance from a cheap smartphone.It will frustrate you.

The Cubot P30 sports a 6.3 inches display with a screen resolution of 2340 x 1080 pixels.This leaves it with a pixel density of 410 pixels per inch.This is one of the features which you won’t easily find on devices within this price range.Most tecno and infinix smartphones ship with a 720 p display and the colors are not that great.

A 1080p display is really good when it comes to watching movies and playing some games especially when on a display this huge.The display also sports the waterdrop design which leaves you with a huge almost bezel-less display.

The viewing angles on the Cubot P30 display are wide enough for you to see the display from any position.However, the display is not clearly visible when you’re standing in direct sunlight and you will have to constantly try to create a shadow over the phone, just to read a text message.

The Cubot P30 runs on a Mediatek P23 processor which is not the best when it comes to heavy smartphone user’s.The processor is coupled with a Mali-G71 MP2 GPU.The phone runs on Android 9.0 out of the box which i don’t think have received the Android 10 update yet.

The phone won’t give you high end performance but it something you can work with.Apps takes sometime to launch and also it’s multitasking capability is not that great.

When it comes to gaming, the phone actually handles games like the Call of Duty online very well but at playable fps.You might notice some lack of smoothness in the gameplay if you’re coming from using a high end device especially due to the weak GPU.

The Cubot P30 ship with 4 GB of RAM and 64 GB of internal storage.This is more than enough space to store all your videos and apps.The phone also supports upto a 128 GB memory card, but you’re have to sacrifice one sim slot to use in order to use a memory card.

I’ll shoot it right of the bat, the camera is bearable.It’ not poor but at the same time nowhere near perfect.The phone sports a triple camera setup at the rear; 12 MP + 20 MP + 8 MP.The portrait mode of the camera produces the best pictures of all the modes in the camera interface.However, just stay away from the bokey mode, it will mess up your pictures.When you switch off the AI mode, the pictures just get much worse.

At the front, the phone utilizes a 13 MP sensor which doesn’t have an LED flash for the night selfies.The night mode however allows you to shoot pictures with more light but they’re not pretty.

Note:The camera’s perform poorly in low light conditions.According to me anyway.They might look good to some people.It depends on what you’re used to see.

The battery on this phone is quite satisfying.It comes with a 4000 mAh battery which sadly doesn’t have fast charging capability.It’s a cheap smartphone anyway so it is understandable why cubot didn’t include it.The battery can easily last you about 28 hours of light usage which is pretty descent.

In almost the customer reviews that i came across, users were complaining about 5 things;

1.lack of a front LED flash

Despite the Cubot P30 having some features which are missing on some more expensive smartphones, like the 1080p display,NFC and the huge battery, the phones performance is not great.The camera is also not the best.The fact that you have to add bluetooth earphones to the budget is also a deal beaker for most.

However, the Cubot P30 is a good smartphone if only you’re on a tight budget or if you’re looking for a huge 1080p display coupled with a great battery life.You will then have to ignore some feature like the camera and the not so good performance.

It would be better just to be patient, add up some cash to your budget and get a better smartphone with a better camera and performance on top of the huge 1080p display.