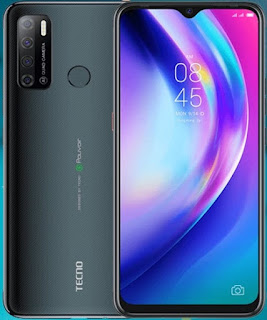 Introduction
The Tecno pouvoir 4 Pro is designed with the consideration of a mobile gamer in mind. That’s according to Tecno anyway but I think it pretty much meets the basic gaming smartphone requirement. The phone comes in 3 colors; Ice jadeite, Misty Gray and Purple.

Display
The Tecno Pouvoir 4 Pro sports a 7.0 inches IPS LCD display with a screen resolution of 720 x 1640 leaving the display with a total pixel density of 246 PPI. A huge display is very essential for gaming but the 720p display I actually a bit of a setback. A 1080p panel would have been better.

Hardware
The Tecno Pouvoir 4 Pro runs on a Mediatek MT6761 Helio A22 Chipset. It comes with a Quad-core 2.0 GHz Cortex-A53 CPU and a PowerVR GE8320 for running those heavy graphics. The Helio A22 is a good chipset although it is not the most powerful so don’t expect a Qualcomm snapdragon performance from it.

Memory
The Tecno Pouvoir 4 Pro ships with enough storage for anyone smartphone user.The phone ships with 128 GB of internal and 6 GB of RAM. It also has a dedicated microSDXC slot for those who will be looking to expand their storage. With 6 GB of RAM, the smartphone will surely run games very smoothly. So I think this is good news for the  PUBG and COD mobile players.

Camera
The Tecno Pouvoir 4 Pro has brought a better camera combination compared to the previous devices from the series. The Pouvoir 4 Pro sports a Quad-camera setup at the rear. The setup houses a 16 MP main camera + 5 MP macro shooter and a 2 MP depth sensor. A QVGA sensor is also included in the setup and a Quad-LED flash.
At the front, the phone utilizes a 16 MP shooter. The phone has the waterdrop design for the front display and so the front camera doesn’t include an LED flash.

Conclusion
From the features on the device, it is quite obvious the device is made with a gamers view in mind. It also made for those who like to watch movies on their phones or spend a lot of their time on YouTube.The huge 7.0 inches display and the increased size of memory points out their intentions very clearly. The lack of the USB-Type C is however something you can afford to ignore considering the device ships for only $160.That’s a fair price for such a high-end features.