Arrival Of The First Transparent Phone. 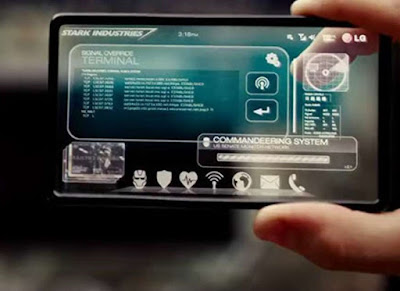 The world has been wondering for a long time now, when are we going to see the launch of the transparent smartphone. We’ve all seen those sleek devices used in sci-fi movies especially in iron man and i’m sure we’d all want to own such a device on day, or atleast see it.
Efforts to produce the first transparent phone has been around the smartphone industry for a long time.In 2009, smartphone giant,LG, launched the LG GD900. The phone was said to be the first translucent phone but i wouldn’t really call it that.
The phone wasn’t really transparent, but it’s sliding touch pad was ‘transparent’.The slide-out keypad was made out of glass and the keys were split by an LED array and the whole thing encircled by by a metal frame.The battery was also made to look transparent so as not to block the effect.All these features created a sleek device with a ‘transparent’ keypad and it was really advanced at the time.
The first smartphone to come close to being transparent was announced back in 2013.The phone was introduced by a Taiwan based Polyton Technologies company.The phone had a completely transparent multi-touch display and it seemed like the start of the new smartphone revolution.
The prototype used a conductive OLED that uses liquid crystal molecules to display images.When the phone is powered off, these molecules form a white cloudy composition but once it’s powered back on, the molecules realign to form text and images.
However the phone wasn’t completely transparent,the micro-SD card could be seen through the glass alongside with the sim card.The microphone,camera and the battery were also quite visible.There has no signs of the device coming to production.
Now it’s 2020 and the smartphone industry hasn’t been able to produce the transparent phone.I think the main challenge is that you need transparent materials to make a transparent phone and making things like the battery transparency is really not easy considering today’s technology.I think we still have to wait a few more years for the ‘spy’ like phone.Maybe by then,our technology will be able to support such advancements.
Share Post
Share on TwitterTweet
Share on Pinterest Share
Share on LinkedIn Share
Share on Digg Share
Send email Mail
previousThe Best Infinix Smartphones Of 2019/2020 With Their Specifications.
nextBest OPPO Smartphones Of 2019/2020 With Their Specifications.