Tecno’s First Smartphone With A Pop Up Camera. Should You Buy The Tecno Camon 15 Pro?

I’m not a huge fan of Tecno but this time they went an extra mile to make sure they give their customer’s the best. The Tecno Camon 15 and the Camon 15 Pro is the first phone from the company to feature an AI pop up camera. We’ve all seen the pop up camera design on other smartphone brands like Oppo and Xiaomi and it seems like Tecno jumped on the same wagon.
Enough with the praise and let’s get right to it. The Tecno Camon 15 pro offers a poly-carbonate plastic glossy finish at the back panel with a lining pattern which actually looks quite attractive. I love the Ice Jadeite color myself. It looks fantastic and i’m sure you would agree from the image below. 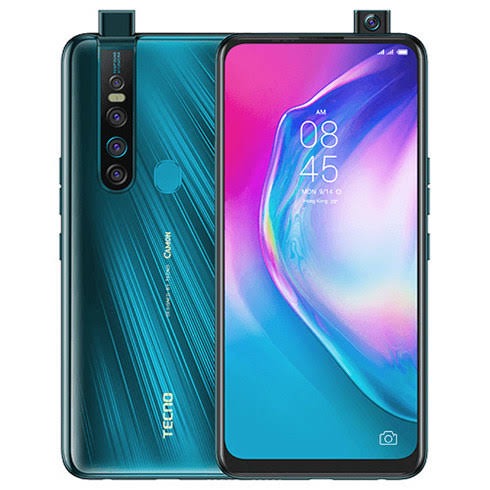 Display
The phone has a really premium design and the front is made of a complete bezel-less display which has a slight chin at the bottom.The curved edges allow the phone to easily fit in your hand as the phone is a bit heavy.The display is made of a 6.55 inch IPS LCD display with a resolution of 1080 x 2340 pixels. This is a huge screen for movies and videos and for the huge display lovers like me. The display is also very clear with very good viewing angles. The display produces amazing colors. An AMOLED display would have been a better look on the Camon 15 though.
Hardware
For the hardware, the phone runs on a Mediatek MT6765 Helio P35 chipset and an Octa-core 2.35 GHZ Cortex-A53 processor. The GPU on the device is a PowerVR GE8320. The CPU is not very powerful but when combined with the GPU it plays lights games very smoothly but when subjected to more demanding games like the PUBG, it doesn’t play smoothly at full graphics settings.
For the storage, the device comes with a whooping 128 GB of internal storage coupled with 6 GB of RAM. I told you they took everything to a whole new level. The 128 GB is quite a lot for any stuff you want save in it. The phone can keeps thousands of pictures and also a lot of apps. The device also runs very smoothly on the 6 GB of RAM on-board without any lag.
Camera
The tecno camon 15 pro is the first Tecno phone to feature a 32 MP pop up selfie camera.The company has added a light mechanism which lit when the cameras pop-up or goes down with a sound.The front camera comes in many modes such as beauty, AI shot,super night and the wide selfie.The camera produces really good pictures without looking over-saturated. The pop up camera is also prone to breakage if you’re are careless when handling the phone.I almost broke it after the phone fell head first toward’s the ground.
For the rear cameras, the phone holds a quad camera setup.There is a 48 MP main camera, 5 MP ultra-wide sensor and a 2 MP macro sensor. A low light sensor is also built into the quad camera set up.I tried taking some portrait shots with the phone and the edge detection is handled really well. Like the front camera, the pictures are not over-saturated or overexposed and they were actually better than those on my Infinix Note 4.
Battery
The battery on this phone is very dependable. The phone ships with a 4,000 mAh battery with a 10 w charger. The phone lasts more than one day of light usage. If you’re going to use it for gaming, you’re probably need to charge it at-least 2 times in a day. For the charging the phone took around 2 hour to get fully charged when from when i plugged in the charger.
conclusion
The phone is a really good budget phone considering the price of the phone. The battery lasts long enough and the display is really huge and crystal clear. The display would have however looked better on an AMOLED display. The phone also comes with micro usb which is also kind of old tech now considering the introduction of the USB Type-C on latest smartphones. Also the rear of the phone attracts a lot of fingerprints which is looks a bit nasty.
Share Post
Share on TwitterTweet
Share on Pinterest Share
Share on LinkedIn Share
Share on Digg Share
Send email Mail
previousThe Most Expensive Smartphone’s Only Meant For Top 1% Covered In Gold and Dinosaur Bones.
nextA Smartphone With A Powerful Chipset. Is The Latest Infinix Note 7 Worth Buying?